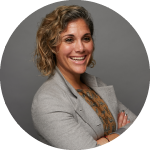 Courtney holds a Bachelor of Arts with a major in Psychology and a concentration in Art History from Columbia College (2004). She relocated to London in spring 2016 as Director of Business Strategy, EU for Brandmovers, a promotions and loyalty agency. Most recently Brandmovers' work with Manchester United won several industry awards.

Prior to life in London, Courtney has lived and worked in New York City, Italy, Japan, Sweden, Spain and the Netherlands, always associated with global marketing and communications. She co-founded the Columbia Alumni Club of Sweden in 2010 and helped run the Netherlands branch of the Club.

Courtney has an MBA and Masters in General Management from the Stockholm School of Economics.