Back by popular demand.

If you missed last year's sold out tour, now is your chance to explore London. 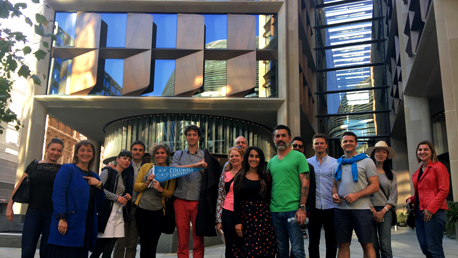 From the Tower of London to the Barbican, the guided walk ventures through the heart of the City, taking in iconic skyscrapers, Classical grandeur and high-tech Futurism.

Join the Architecture Foundation (at a special price for CUCL members) for a walking tour exploring the City of London. From its Roman foundations, through medieval origins and right up to its present status as a global financial centre, the walk takes in the towering blocks, ancient landmarks and mysterious alleyways of this remarkable and enduring fortress city.

Starting with one of the capital’s oldest and most forbidding structures, the Tower of London, we will venture into the Square Mile’s ancient thoroughfares where new towers, including The Walkie Talkie, The Cheesegrater and The Gherkin, draw global attention.

Witnessing the city’s commercial heritage, walkers will sample the sights and sounds of Victorian Leadenhall Market, discover the futuristic Lloyds of London, take a stroll down historic Threadneedle Street and take in the Classical grandeur of the Bank of England, Royal Exchange and home of the Lord Mayor, Mansion House.

We will learn how the fabric of the City, where ancient past and high-tech present collide everyday in its great banks, city liveries and institutions, grew layer-upon-layer over the centuries. We’ll hear an architect’s view on the City’s decaying fortress walls, mysterious medieval courtyards, spectacular Baroque churches, Victorian counting houses, vanishing post-war skywalks, towering Modernist offices and Post Modern wonders such as No.1 Poultry.

Venturing west the tour will sample Christopher Wren’s world-famous masterpiece, St Paul’s Cathedral, before learning of the stylistic controversies surrounding Paternoster Square. Finally we will visit the imposing medieval Guildhall complex, which features a hidden Roman gladiator arena in its basement, before proceeding north to conclude the tour at the Barbican, one of the world’s greatest Brutalist mega-structures.

The Tower Of London, London, UK

Sorry, this event is sold out.